What is at Stake (or what is YOUR Stake) in the 2019 European Union Elections?

The 2019 EU elections are coming up, and if it were not for my other European friends, I would probably not be locating the voting polls between 23rd and 26th July 2019.

Before I urge you to run to the voting polls or complete your registrations (for those of you living outside your country of origin/nationality/citizenship), I would like to, through my personal experience, trace my uneven journey with the EU. During the last EU elections in 2014, I did not vote although I could have. I was 18 at the time and Greece’s rattling relationship with the EU is perhaps a factor that pushed me away from the ballot box that day. My friends around me never spoke of the elections, nor did my parents urge me to vote despite being politically-aware. Media coverage was not great in Greece either, as the media was preoccupied with internal (primarily financial) concerns meaning that they overlooked perhaps one of the most important elections.

It is easy to attribute this to the socio-political climate in Greece: the EU appointed harsh austerity measures and there were debates around leaving the eurozone culminating in a referendum only one year later. However, overlooking these elections may arguably also be because of a preoccupation with internal matters; empowering the national agenda and ‘forgetting’ or overtly ignoring international matters. This turn to national interests reflects a broader delegitimizing of international institutions and organizations that, at the end of the day, play an important role in the international economy as well as matters concerning migration and conflict. This delegitimizing may seem undamaging when coming from a country as small as Greece, but ultimately, we have recently seen examples of larger countries taking a similar stance, notably Britain. Although my personal stance lies in challenging the legitimacy that institutions automatically gain, I do believe that at the moment supporting EU politics remains a priority. It can be an effective way of fighting the growing nationalism and right-wing influence in the different European countries.

Having now lived in both a country that decided to leave the EU but did not and one that is negotiating (or rather quarrelling over) the process of doing so, I can testify to the importance of strengthening international rather than national institutions. Greece was able to get a bailout by remaining in the EU, not to say that this was the fairer option, but leaving the EU in a lingering bankruptcy could not have solved the problem. I recognize the EU’s hardline stance through their impositions of harsh austerity measures on Greece. However we must not forget that this was a crisis engineered from within, from the incompetency and corruption of not only Greek political leaders, but largely of the whole Greek ruling/upper class. Certainly, from what we are currently witnessing in Britain, with a decision that drew out only sectarianism within the UK and embarrassed it internationally, leaving the EU does not seem like a viable, sustainable or wise decision.

Furthermore, an issue that may be more relatable across the board, is of course the threat of the rising far right.  Even if not occupying the ruling parties yet (although in Austria the far right actually is the ruling party), the far right has swept parliamentary seats across the continent. As Politico EU notes “together with French far-right leader Marine Le Pen, Salvini is seeking to rally like-minded politicians from across the Continent into a unified Euroskeptic bloc that would campaign under a common platform during next year’s election — and work together afterward to reshape the EU”.  This statement reminds us to keep in mind that not all far right leaders support a turn inwards and the rejection of the EU. Instead, a very real threat arises from those with ambitions to ‘reshape’ the EU, taking it into a direction that could be truly detrimental not only within the EU and the ongoing refugee crisis but also in the international issues that the EU chooses to support (or rather ignore). Salvini, one of the main Euroskeptics, has already made his agenda for asylum seekers from Africa: “when it comes to migration, Salvini says he’d invest more in Africa, to keep people from leaving.”

Sounds like a great idea, no? Actually, this statement mirrors many that have argued that the refugee problem can only be controlled by building refugee camps in African countries, in many cases trapping people in dangerous conflict zones instead of allowing them to reach safety. To unpack the reasoning and motivations behind Salvini’s statement, we only need to look at his policies of closing down Italian ports to refugee boats and calling refugees ‘pirates’. On a wider EU level we must NOT FORGET the termination of Operation Sophia, the EU’s anti-smuggling operation that was able to protect some people crossing the Mediterranean from trafficking. Also, we CANNOT FORGET how people “fleeing Libya have suffered serious human rights abuses at the hands of some Libyan coastguards, who are funded, equipped and trained by the EU”.

In light of such disturbing and dangerous international stances, the stakes are high in the coming EU elections. Simultaneously, women are also still largely underrepresented in the institution of the EU. Below is a map that shows us where women MPs come from and which parties they represent. It is in our hands to change this and see those positions being filled with those we support and whom truly represent us. 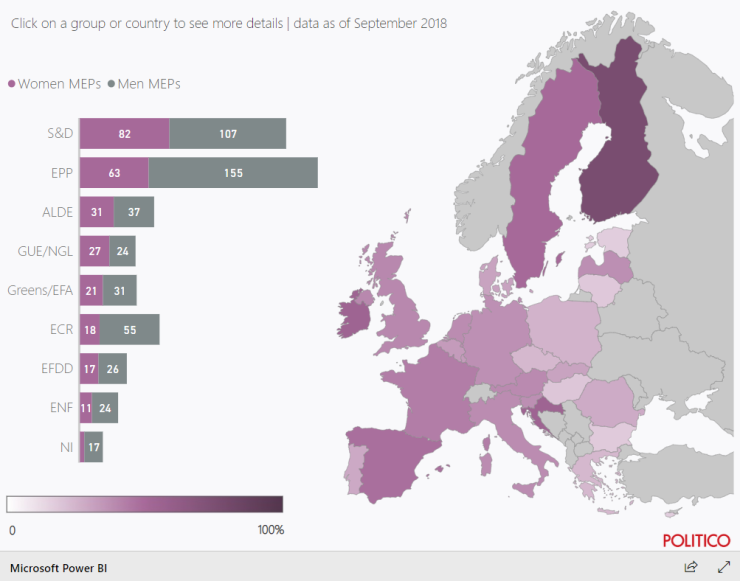 According to a poll by the special edition of the EU Barometer published in November, more Greeks would like to know more about the EU and its workings, but actually do not currently know much. Therefore, it is necessary for the EU to become more transparent in this year’s elections. Similarly, for media outlets, it is crucial to cover the election substantially. Otherwise we will end up seeing a vacuum that can leave far rightists (Euroskeptics or not) dominating the debate and assuming positions of power. I therefore DO urge you all to go and vote in the upcoming EU elections. Your elector vote is a right and you must exercise it.

YOUR stakes are high.

Click the link below to find out more about the issues and candidates of the upcoming EU elections (with the option of taking a quiz to see which candidates you should be voting for at ‘Find a match’ at the bottom of the page):