How much energy do I have to invest to “make the world a better place” already?

Everything is political. Even looking for a flat.

I recently joined multiple housing groups in Cairo and posted that I was looking to rent a room in a nice flat with nice people and no pets. On my Facebook page, you can find a picture of me in a bra, a picture of me shaving in a bathtub, and an endless list of posts promoting Kandaka. Clearly, I am a progressive feminist who finds it funny to caption her sports-bra-art-hoe-profile pics: “Feminism is a socialist, anti-family, political movement that encourages women to leave their husbands, kill their children, practice witchcraft, destroy capitalism and become lesbians”.

None of this protects me from male predators on the web. From the moment I had joined the housing groups, Ahmeds, Mohameds and Mahmouds were sliding into my DMs. Amongst some of our conversations was an enraging debate about Islam and (how it apparently requires) homophobia as well as endless interrogations about my sex life. Most often, people would text me “Ur pics amazin. Can I ask where r u from.”

“Where are you from” is an exhausting question to many people like me. For the reason that, usually, I don’t want to get into the politics of it, I’ll just swallow my irritation, stifle the “why do you care?!” and tell them (a comprised version of) where I am from: Germany and Sudan. Fetishise me*.

Unsurprisingly, some next Mahmoud did:

“Nigga and blonde” is not merely a tasteless over-simplification of my heritage. Mahmoud found the most insulting and disrespectful way to describe my identity. In his attempt to be ‘funny’, he reduced my father to his skin colour and labelled him with a traumatic swearword that he, as a light skin Egyptian man, has no right to use. Assuming that my mother is “blonde” reduced her to a hair colour that (especially in the German context) is connected to a stereotype that someone like me, meaning someone of Jewish heritage, does not uncritically relate to Germanness. For everyone’s information: not all Germans are blonde and have blue eyes, Hitler didn’t want you to know.

Having someone summarise my identity in these words is not funny, it’s painful. Reading his message early in the morning and at a loss for words, I posted a screenshot of our conversation to my Instagram story. “If you have a good answer, please let me know because I don’t know what to say.” As expected, most reactions were a simple “wtf, block&delete”. However, there were also those (men) who empathised with him, because “he hasn’t been taught” or “here in Egypt, we don’t know what racism is.”

There were about ten other Egyptian men who were appalled by his words. Clearly, the issue is not being Egyptian or being a man. This specific Mahmoud is just an idiot who I should block&delete. “But if you do that, how will he know what he did wrong?” Suddenly, the fact that he contacted and insulted me now makes it my responsibility to rectify the situation and educate him. Sit down in front of my laptop and type to a random guy who I will (obviously) never meet why in 2019 you cannot use the n-word. Why you cannot just ask people where they’re from. Explain to him politely how he is just another one of the many who find me attractive because to them I embody the mystical, exotic African woman who probably loves sex as well as the civilised German who is educated and walks in an aura of European supremacy.

As the day proceeded, I received messages by people saying “hahahahaah nigga and blonde” (like, really, did you just laugh at him AND THEN TYPE NIGGA TOO?????). Some even had the nerve to try and start discussions about whether or not anyone who wants can use the n-word. In the evening, I was tired. Tired from being pressured to “do my part and make the world a better place” and from texting people “wtf man this isn’t funny”. There is a fine line when it comes to racist humour. Without the laughter, it’s just racist. Never ridicule oppression. The Mahmoud had annoyed me, but what really disappointed me was how some members of my community reacted to this incident. 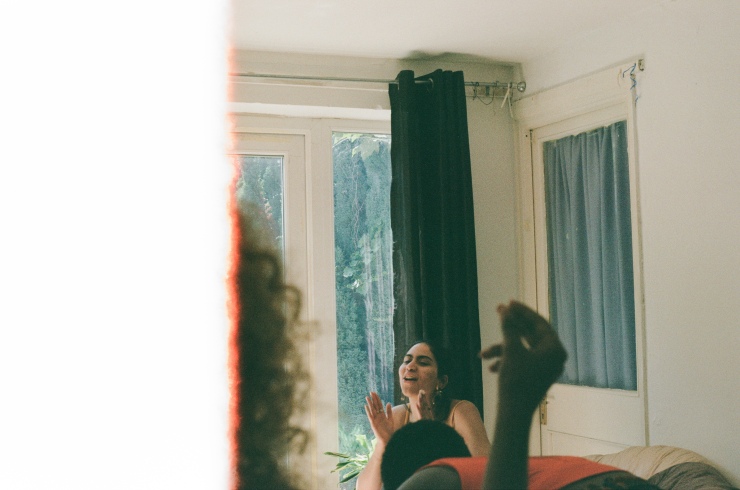 So, here’s an important concept for y’all: Do not expect the oppressed to stand up for themselves, they are already struggling to process and manoeuvre their oppression. Instead, stand up for each other. This means: If you are not black and another non-black person says the n-word, do not expect your black friend to call them out, CALL THEM OUT yourself! If you are a man witnessing sexism, do not leave it to your womxn friends to give a ted talk every time Joe and Mahmoud aCdiDenTAlly OfFenD them, CALL THEM OUT yourself!

If your friends misgender people, remind them that there is not only she/her and his/him. We are moving beyond binaries, but you can still be on the wrong side of history. Call out islamophobia and antisemitism, call out homophobia, call out/recognise ableism. Basically, speak up whenever you can without putting your own mental health at risk. Not only will you improve the lives of those around you, but you will very likely have a bigger effect than they would. If a man talks to another man about sexism, even though he has no personal reason and purely because he recognises that the patriarchal power structures are inherently based on inequality, the other man is more likely to listen to him. The illusion of objectivity helps in these cases and the further we are removed from a certain topic, the less emotionally draining is our outrage.

Spread the word so that we can make the world a better place without individuals, specifically womxn of colour, doing all the emotional labour that we are expected to invest in order for the world to respect us one day.